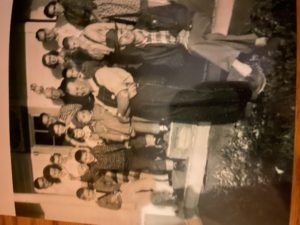 Family of storytellers. I am to the right with my hand on my chin, behind my dad (sitting) and his dad standing to his right.

Oh, for a time machine! To be able to go back and get one more hug from the grandparents and listen to one more story from my family of storytellers.
They were practical, down-to-earth people. In fact, they were people of the earth — Illinois farmers who battled floods, drought, searing heat, blizzard blasts, and the specter of the Great Depression.
They had each other and their faith. In that, they were rich, and entertained by the stories they told around the dinner table and the wood stove in the front room.
A prankster uncle in the volunteer fire department, for example, told a nosey passerby during a training exercise that he was pumping water out of a ditch to rescue a woman who had fallen in the water. The man drove away, not knowing what to believe.
There were stories about men who were crippled or killed by farm machinery, war stories, and people who lose their minds, perhaps by the sound of howling prairie wind shrieking around the corners of their house.
Nothing compares to Florida, however.
Consider, two men who were recently arrested and charged with stealing skulls out of graves for Caribbean voodoo rites.
Or a 30-year-old man who told sheriff’s deputies he stabbed his 77-year-old grandfather to death and cut off his ears because he wanted him to be with his dead grandmother.
The term “family feud doesn’t begin to explain how a man could allegedly kill his infant daughter to spite his wife, who wanted a divorce.
Of course, there are cases of biker wars, love triangles and drug killings, including those set on fire by very, very angry dealers.
I earned a bachelor’s degree in political science at the University of North Florida in political science. Later, after working at the Augusta Chronicle for a time, I went back to school and got my master’s degree in journalism at the University of Georgia.
I could kind of relate to famed Washington Post editor Ben Bradlee, who spoke at the university one day about his formal education.
He was armed only with a degree in French and a notebook when an editor sent him out to do a story about a man who had been hit by a train.
“I didn’t know what I was looking at,” he said.
He decided to use his language training to become a foreign correspondent.
In some ways, nothing can fully prepare you for “train vs man,” as the cops phrase it in their radio communications.
Working for decades as a reporter and editor helps. Besides the Augusta Chronicle, I have worked at the Daily Commercial (twice), Wilmington Star-News, Orlando Sentinel and Ocala Star-Banner. But even I was surprised in 1996 to learn about 16-year-old Rod Ferrell beating a couple to death with a crowbar, especially when he was the leader of a cult of blood-drinking vampires.
His victims were the parents of one of his cult members, who ran away with the cult.
Discovery ID, the Hallmark Movie Channel, Oxygen and Court TV have aired documentaries about the case and called on me to be the journalist-author expert. I have covered the story for more than 20 years, including his recent appeal.
It’s only natural, I suppose. Storytelling is in my blood. And it’s other people’s spilled blood that I write about.