1.Why did you become a writer and a journalist?

I think I was born to write. My parents said when I first started to talk as a young child, I turned words and letters around. Maybe I was learning to compensate and enjoying the challenge. Who knows? One thing is certain. I always loved to read, and I also grew up in a family of oral storytellers. Some stories were tragic, involving accidents, a World War II vet who had post-traumatic stress, and a woman who tried to commit suicide by drinking Drano. Many tales were funny, however, like the community drunkard who found himself racing downhill backwards when the brakes failed on his car. All he could hear, over the sound of his own screaming, was the sound of horse weeds banging against the fenders. “I knew I was going to hell,” he said, not mentioning the fact that he never thought about changing his ways afterward.

Crime has always fascinated me, especially murder. When you take someone’s life there is no “redo,” no restitution, no comfort or real closure for loved ones, and no justice in the world that will ever bring that person back. The “why” question drives me to search for answers, but sometimes it’s the who, what, when, where and how that also staggers the imagination

3.Why do you like to cover the courts as a journalist?

It is true that much of the evidence and testimony in a trial is so dry and technical it is downright stultifying. But there are moments of real drama, too, like when a witness or victim points to the defendant and says, “That’s him.” Everyone, of course, wants to hear what the defendant has to say, although it rarely happens since he has a right not to testify. And then, there is that moment in a murder trial when the jury comes back into the courtroom and the foreman announces it has a verdict. If your heart isn’t pounding at that moment, then you need to find another line of work.

4.What writers influenced you?

Edna Buchanan wrote two must-read books for reporters and true-crime fans about her days as a Pulitzer-prize winning journalist for the Miami Herald. They are, The Corpse Had A Familiar Face, and Never Let them See You Cry.

Among her tips: Always ask what the murder victim was wearing. She learned the hard way after a killer dumped a man’s body onto the street from a pickup truck. “The case seemed somewhat routine – if one can ever call murder routine,” she wrote in Corpse. “But later, I learned that at the time the victim was shot he was wearing a black taffeta cocktail dress and red high heels. I tracked down the detectives and asked, ‘Why didn’t you tell me/”

I know what she’s talking about. One day, a reporter was writing a story about a woman who killed her husband and wrote something on his chest. It wasn’t my story, but I had to know what it was, so I called a source.

“Love you forever,” she wrote with a marker.

“Now we’ve got a story!” I told the reporter.

Of course, there was Ann Rule. Her greatest work in a long line of successful books was The Stranger Beside Me about her friendship with Ted Bundy.

Vincent Bugliosi’s Helter Skelter was a model in some ways for my book about Rod Ferrell. The book goes into great detail about his role as the prosecutor of Charles Manson’s murder cult in California.

The granddaddy of them all is In Cold Blood by Truman Capote. He blended fiction techniques with journalism in telling the story of a farm family slain in Kansas. It is a great read but there has been speculation that Capote was not 100 percent accurate. Legend has it he never took notes.

5.What does he future hold professionally?

I have no plans to retire. I’ve tried it a few times and I don’t care for it. I do freelance work for the Daily Commercial newspaper in Leesburg. I am blessed. I can do as much or as little as I like and I won’t starve either way.

I am thinking about another true-crime book.

I have written a novel about an Iraq War vet with issues, who meets a woman with… issues. The marketplace is in a weird place right now, so I’m sitting on it, for now.

Buchanan found success after she retired from newspapers by writing crime novels. I have an idea for such a book, based loosely on a real case.

My grown-up daughters would like me to write a children’s book. “I could write about a homicidal bunny rabbit,” I joke. All kidding aside, I just might do it. I like playing with words and might even turn a few around for old times sake. 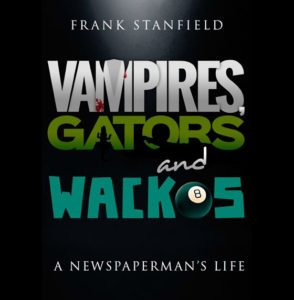