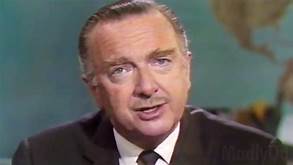 Journalism. Maybe it was always complicated. Maybe readers were always confused about where you’re coming from, were skeptical, or just outright hostile. But today? Reporters and editors are hanging on by their fingertips over a widening chasm.

I find myself longing for the “good old days” of Walter Cronkite, who signed off every CBS Nightly News show by saying, “And that’s the way it is.”

We believed that the grandfather-looking man on the tube was telling it like it was, even if in his signoff he was really saying, “and that’s the way it is, through my interpretation, and with the time constraint of 30 minutes, not counting the commercials.”

He seemed to be objective, and I think he was as neutral as he could be, except on that rare, very special occasion when he voiced his opinion about a crucial issue.

On Feb. 27, 1968, at the end of a CBS News Special Report, he told viewers that the Vietnam War was destined to end in a stalemate.

“… it is increasingly clear to this reporter that the only rational way out then will be to negotiate, not as victors, but as an honorable people who lived up to their pledge to defend democracy, and did the best they could.”

Yes, it came after the Tet offensive, a bloody battle captured on camera, that showed the strength and determination of the North Vietnamese communists.

But when Cronkite said it, it carried tremendous weight.

Journalists have lost a lot of clout since those days.

Sure, there were only three networks, and newspapers were in their heyday, but the fact that reporters tried to be objective gave them credibility. Now, thanks in part to 24-hour cable news, a flood of broadcasters’ opinions carry the weight of confetti blowing in the wind.

Politicians hammer reporting they don’t like as “fake news,” and sad to say, sometimes they are right.

Another reason Cronkite had credibility is that he went to Vietnam and he sent other journalists there to see what was going on. It’s called research, research with an open mind.

It not only takes courage to dodge bullets in a combat zone, but to stand up to pressure from government sources to “get on the team,” as one officer told a CBS reporter at a briefing.

Yes, reporters have an obligation to their news organizations, but they have a bigger responsibility to their readers and viewers.

It is a big responsibility, and one not to be taken lightly. Accuracy, honesty, trust. It’s what it’s all about, or should be.

I’ve always tried to do my best. You can’t be so neutral you’re wishy washy. You have to tell it “the way it is,” through your training, experience and desire to tell the truth. That training, for me, included being objective.

It’s sad when people are surprised that I don’t embellish, twist and shade things.

I joke and say, “How do you ‘improve’ a story about vampire cult murders?” But even if I could, I would not do it.

I once worked for an editor who used to say, “Credibility is all we’ve got.”

He was right, and it’s not just a matter of maintaining a healthy business. If true journalism completely disappears, what’s left in its place? Politicians and PR flacks only giving their side? Corporations protecting the bottom line? Cranks spewing conspiracy theories and falsehood on the internet?